Who doesn’t love a sunny day?! The sun is literally the center of our lives, starting our days and warming our earth. The beautiful sun can also be converted into usable energy. Now that it’s mid-November, the days are growing shorter, the sun is getting less frequent. This is one of the criticisms of solar power, it’s intermittency, or inconsistency, which people correlate to unreliability. Although true, the sun doesn’t shine 24/7/365, there really is no perfect solution to our energy needs. Natural fossil fuels release long-sequestered carbon and emit greenhouse gases, wind power is noisy, obtrusive, and just as intermittent as solar, geothermal and nuclear powers have their own difficulties. Yet we need energy, to warm our homes, power our cars, and light our lives.

Entering my fourth month in Germany, I have noticed, and studied, the high number of solar panels around Freiburg. They are everywhere! Even in my student housing complex (which used to be a hospital during WWII!) there are solar panels that I can spot from my kitchen window. The town hall looks like something from the future, a round building decked out with solar panels around the entire structure. An old landfill is in the process of being covered by solar panels, feeding into the local power grid. Part of the prominence of local solar panels is due to subsidies from the city of Freiburg in the early 2000s to retrofit older homes with solar panels. As a result, a good portion of homes now produce energy, and help to power the city.

The pictures below show the rooftop of Hotel Victoria, an eco-friendly hotel that became sustainable in the 1980s, before sustainability was “a thing”. The hotel now relies 100% on renewable energy, much of which is sourced from the rooftop solar panels and small wind turbines. The solar panels are just one part of the many sustainability aspects of the hotel, accompanied by a wood-pellet heating system, groundwater cooling, strong insulation, and many other factors.

There is no perfect system for energy extraction, and each energy source has its pros and cons. However, solar is definitely a step up from fossil fuels and natural gas, and should be considered as an alternative energy source going forward. 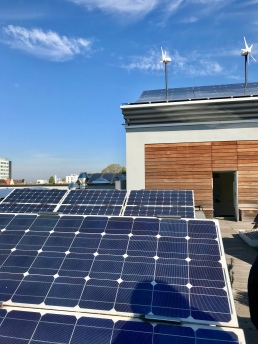